While the Rice County Board of Commissioners has not yet determined the future of the site, it agreed Aug. 27, 2022, to demolish seven structures on the Law Enforcement Center block. That work, which began Nov. 7, 2022, took about two and a half weeks to complete.

More discussion by the board about how to proceed is anticipated in 2023.

Knowing the Law Enforcement Center/jail would eventually need to be expanded, the Board of Commissioners began acquiring properties adjacent to the LEC/jail as they became available.

But when the board in 2021 learned that an addition to 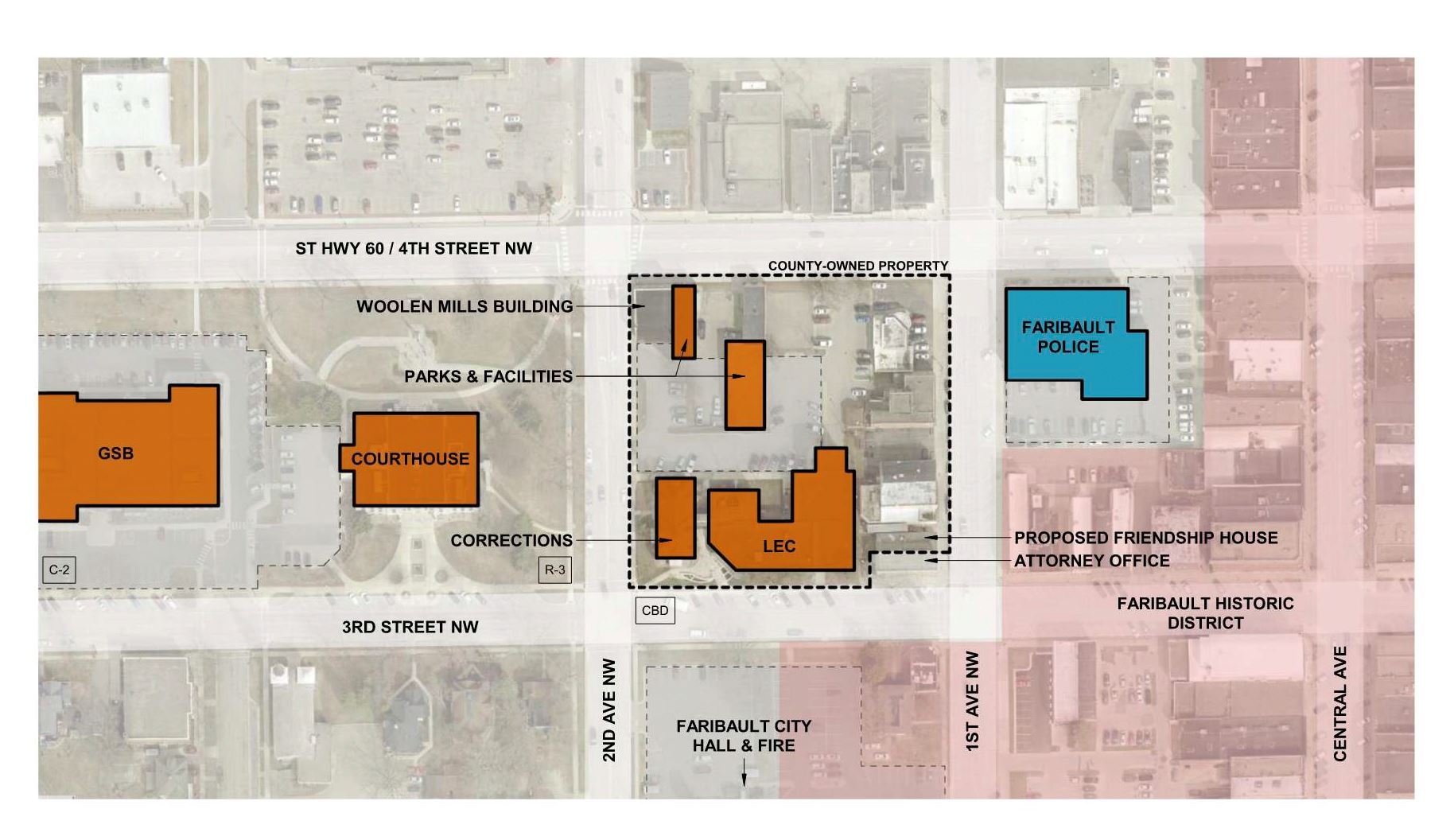 the Law Enforcement Center/jail on its current site was not desirable or cost effective, it turned its attention to adjacent county-owned properties along Fourth Street and First Avenue NW in Faribault.

The board selected Wold Architects to help it assess the viability of the eight existing properties and evaluate the best and highest use for the north portion of the block just west of downtown Faribault.

As part of its review, Wold staff met regularly with a committee that includes city and county officials, and Commissioners Dave Miller and Jim Purfeerst to review the Board of Commissioners' goals for the site, information gathered, as well as city of Faribault zoning requirements and its vision for the area.

The committee also discussed the city's desire for additional secure parking for the Faribault Police Department, just east of the block. 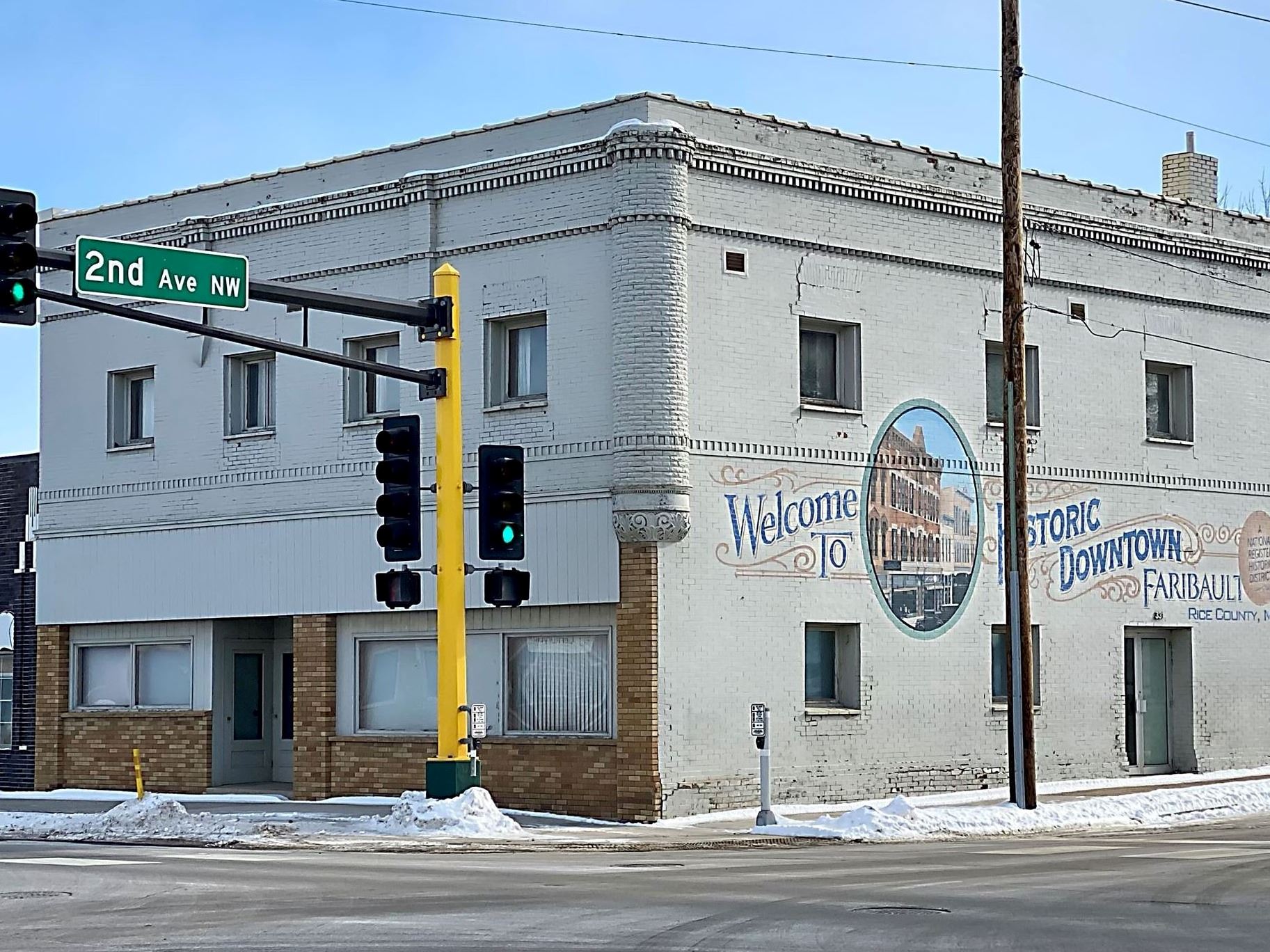 Seven of the eight buildings, constructed between the late 1890s and 1950, suffered from a variety of ills, including aging mechanical systems: plumbing, electrical and heating/cooling.

The most prominent of the group, the Klemer Building (129 Fourth St. NW), was built in the late 19th century as a store and offices for the Faribault Woolen Mill Co. and acquired by the county in late 1999 for $125,000.

On Feb. 1, 2022, Wold representatives told the Board of Commissioners that reviving this piece of the city's history could cost up to $5 million, but still not return it to its former glory. Replacing missing architectural enhancements and recreating original exterior finishes would be an additional cost. Because the building was denied a spot on the National Register of Historic Places, grant funding for repairs/renovations is scarce.

In late February 2022, Faribault City Council designated the properties as blighted, that is, no longer in an acceptable or beneficial condition. The designation is valuable to potential developers interested in seeking financial assistance from the city of Faribault through Tax Increment Financing.

The eighth building, 306 First Ave. NW, is in good condition. The county continues to use it as a "clubhouse" for Friendship House, which serves adults with serious and persistent mental illness.

Its neighbor to the north, 308 First Ave. NW, was acquired from the state of Minnesota in December 2021 through the tax forfeiture process. As part of Rice County's application to the state, it shared its plan to demolish the structure and use the land for a community garden that Friendship House club members would tend.

A ninth building, a law office at 302 First Ave. NW, is not owned by the county and was not part of the review.

The county will continue using the current Law Enforcement Center at 118 Third St. NW, part of which sits on the National Register of Historic Places, once the new Public Safety Center is complete. Current plans call for Community Corrections, and Parks and Facilities staff to move into the space.

Wold developed four concept plans for the area. The options were presented to the County Board of Commissioners Tuesday, Feb. 15, 2022. No determination on how the county will proceed, other than demolition of seven buildings, has yet been made. 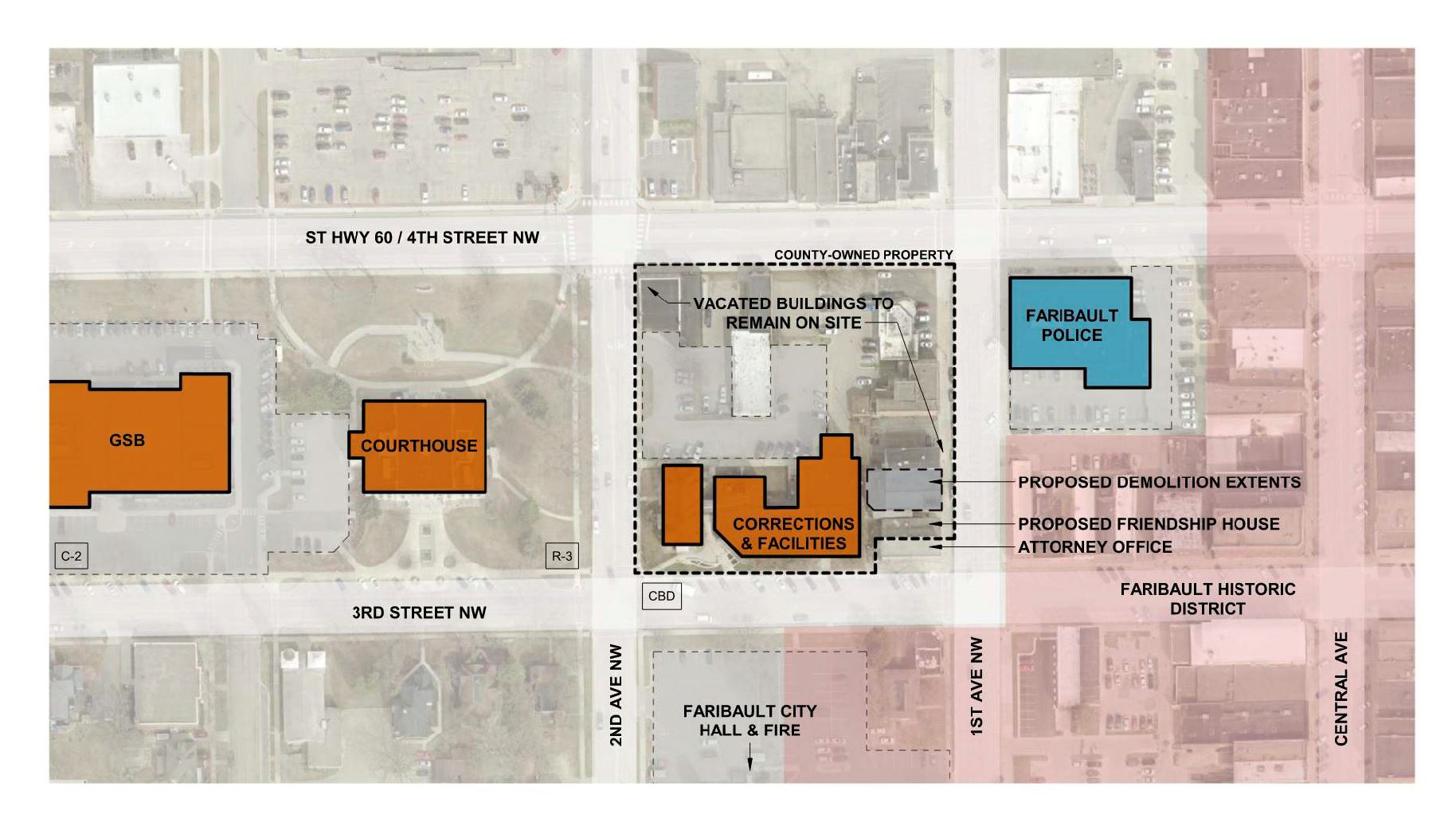 Option one was to renovate/repair six of the eight existing structures.

The building at 306 First Ave. NW is the new home for Friendship House, a gathering place for residents diagnosed with serious and persistent mental illness.

The adjacent property at 308 First Ave. NW will be demolished. The county, in documents filed with the state to acquire the property, which was in tax forfeiture, committed to converting the property to a community garden for Friendship House residents to tend.

Costs for option one were expected to be high. Wold Architects in February 2022 estimated that making the Klemer Building at 129 Fourth St. NW habitable would run anywhere from $3.5 million to $5 million.

The building was constructed in the late 1890s as a store and offices for Faribault Woolen Mill Co. It was designed by Olof Hanson, believed to be the first deaf architect in the United States. Hanson's design has been modified over the years; many of the building's distinctive architectural elements have been removed. Historic restoration would be in addition to Wold's estimates. 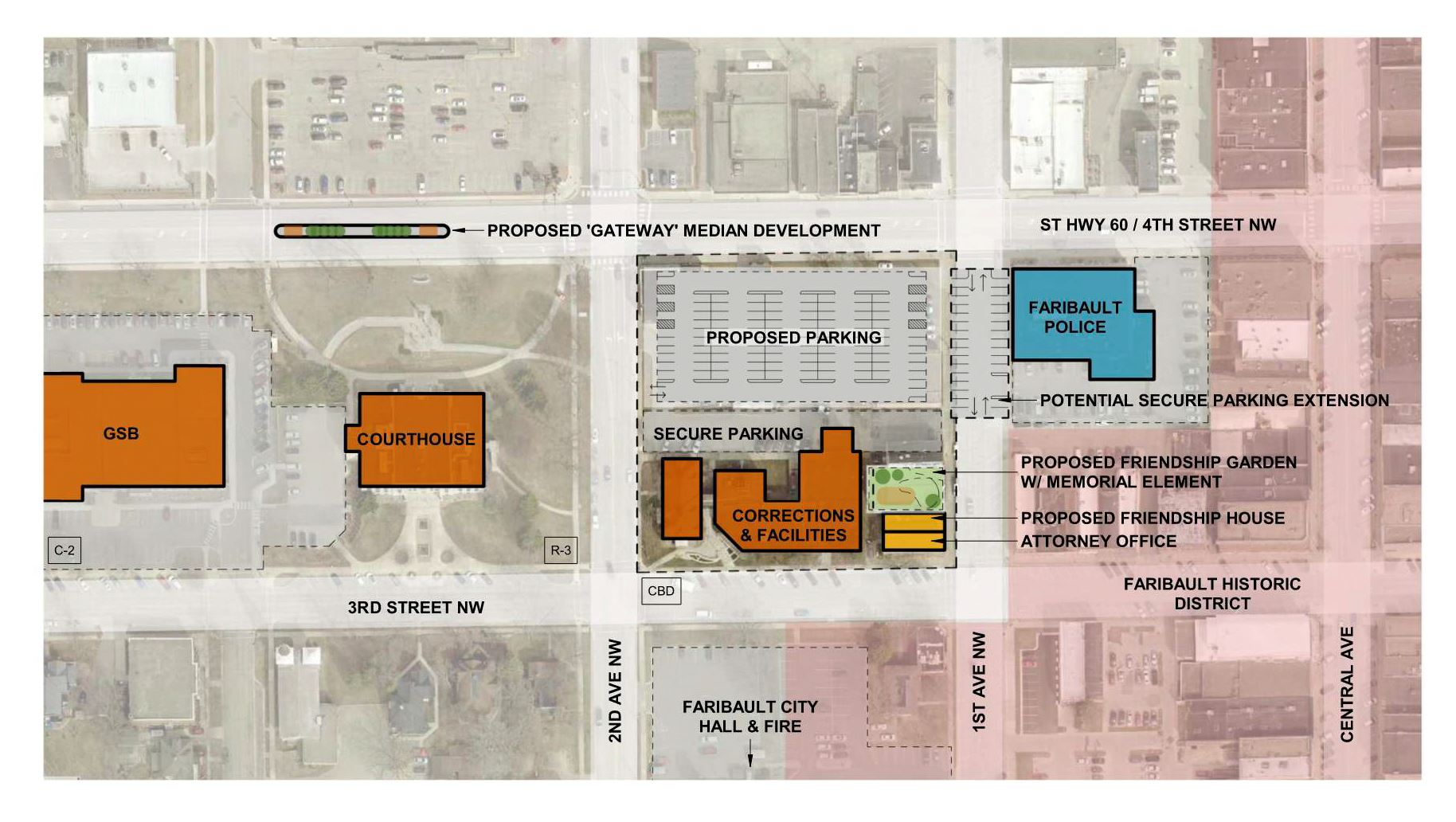 With nearly 400 county employees working in the Government Services Building, Courthouse and Law Enforcement Center, parking in the area is at a premium, particularly in the winter when portions of the lots are used for snow storage. Even in good weather, on-site lots are nearly always full and on-street parking is often hard to come by, especially for visitors who have business with the county.

With Community Corrections, and Parks and Facilities staff expected to take up residence in what's now the Law Enforcement Center, the need for employee parking won't disappear when Sheriff's Office and Jail employees relocate to the new Public Safety Center.

Faribault city leaders have expressed a desire for additional parking for its Police Department vehicles. Option two would allow the county to lease a portion of the lot to the city for FPD parking.

There's also a perceived need for parking in downtown Faribault. A large lot could fill any need for parking downtown, and for events there and at Central Park, both just a couple of blocks away. 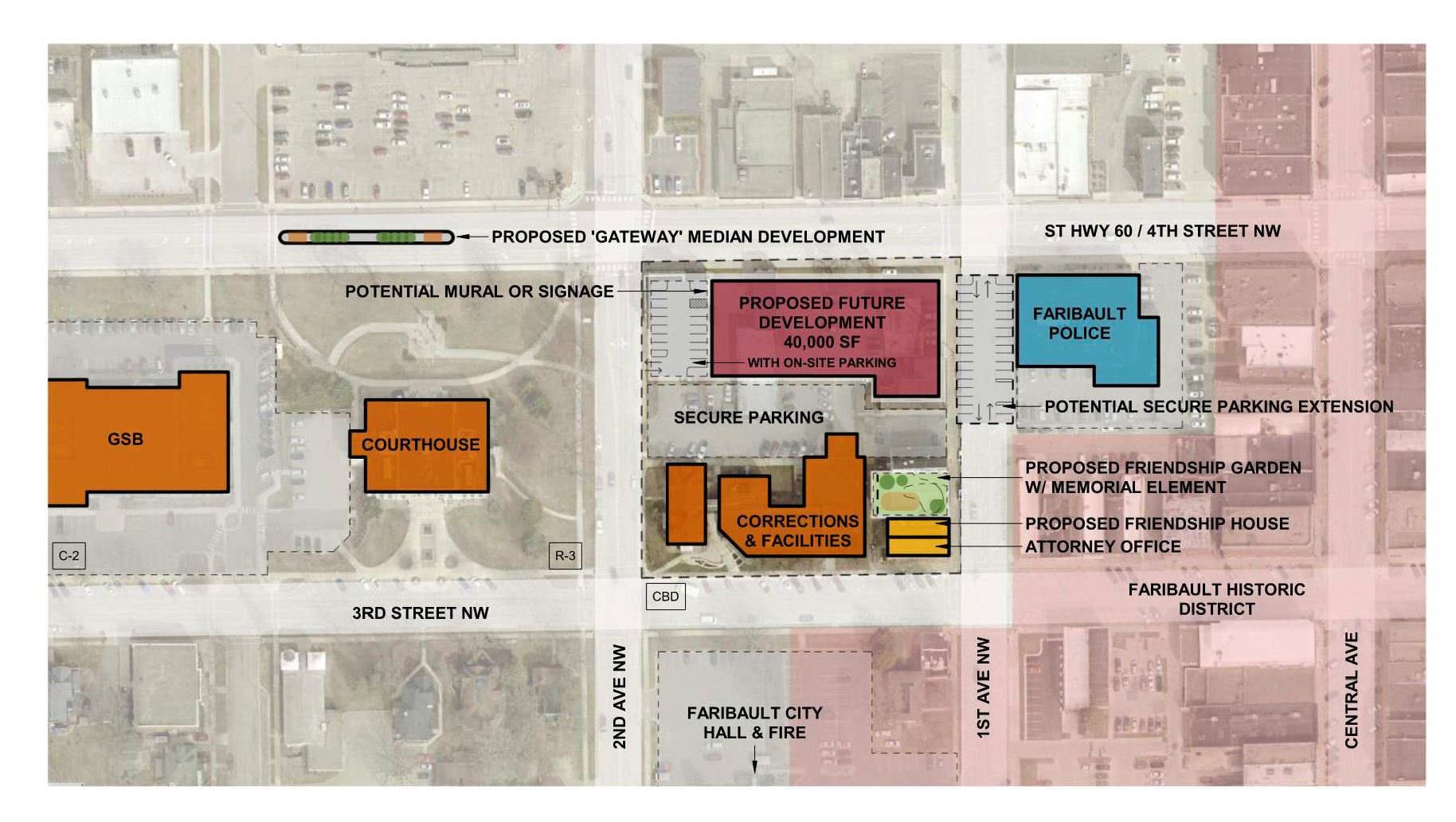 Option three also involves demolishing the seven buildings, but has the county issuing a request for qualifications (RFQ), asking developers to submit profiles/resumes for selection.

While the committee has discussed the potential for multi-family housing, which city ordinances permit, an RFQ would allow the board to widen its scope of potential projects.

The RFQ process (as opposed to selling the property outright) would allow the Board of Commissioners to steer the project, and ensure an outcome that benefits the county, city and its residents.

While the block is located within the city of Faribault's Central Business District, city leaders have expressed a desire for housing in the downtown area, anticipating that it would help revitalize its historic business district.

Studies done for Rice County and the city of Faribault show a severe need for housing, particularly rental housing that the average earner can afford. According to the county's 2018 study, Rice County is the third most expensive area in the state for housing, behind Rochester and Minneapolis-St. Paul-Bloomington.

Development on the site would also bring the property back onto the tax rolls. 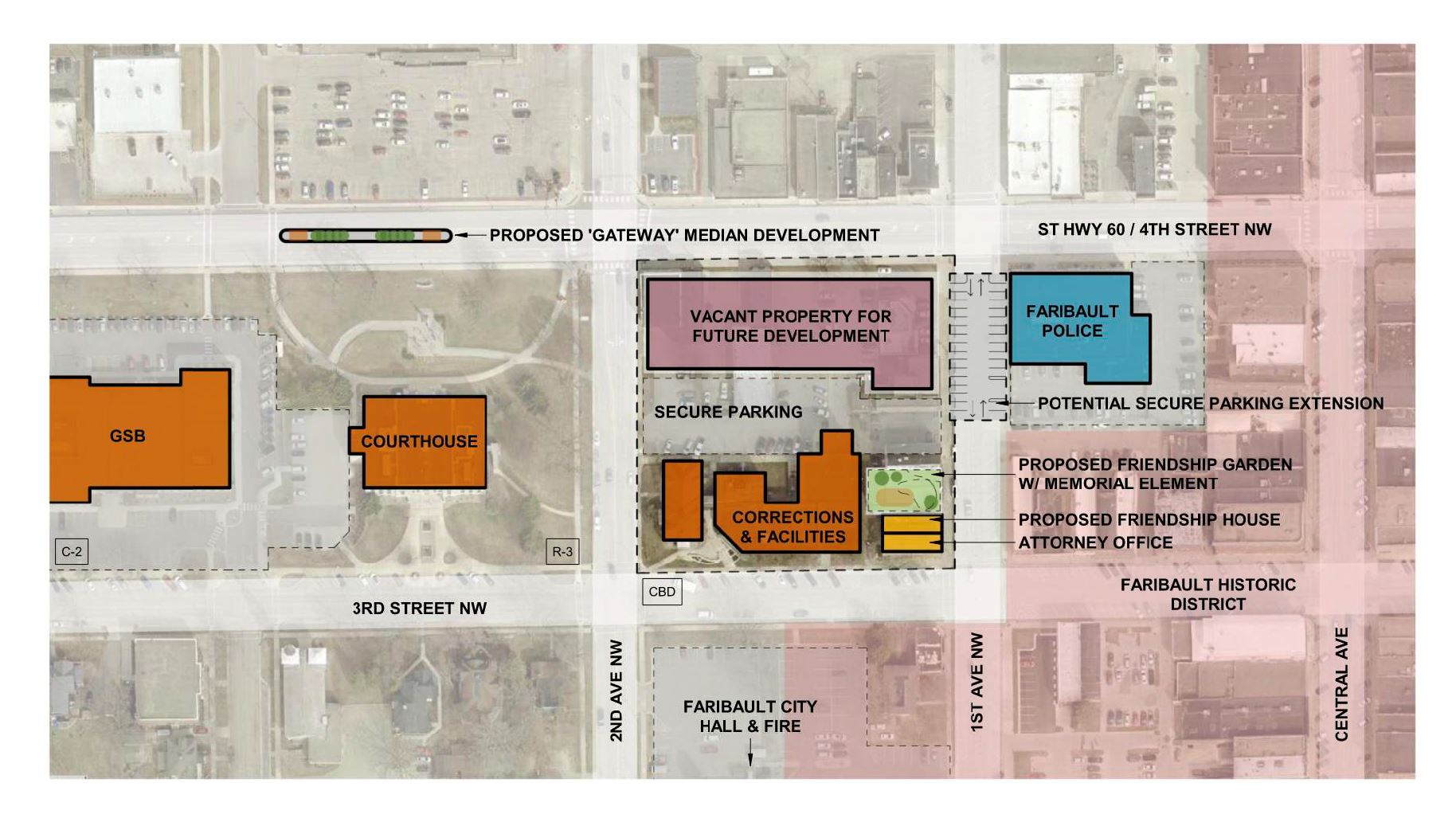 This option includes razing the seven structures and leaving the site bare while county leaders decide how to proceed. 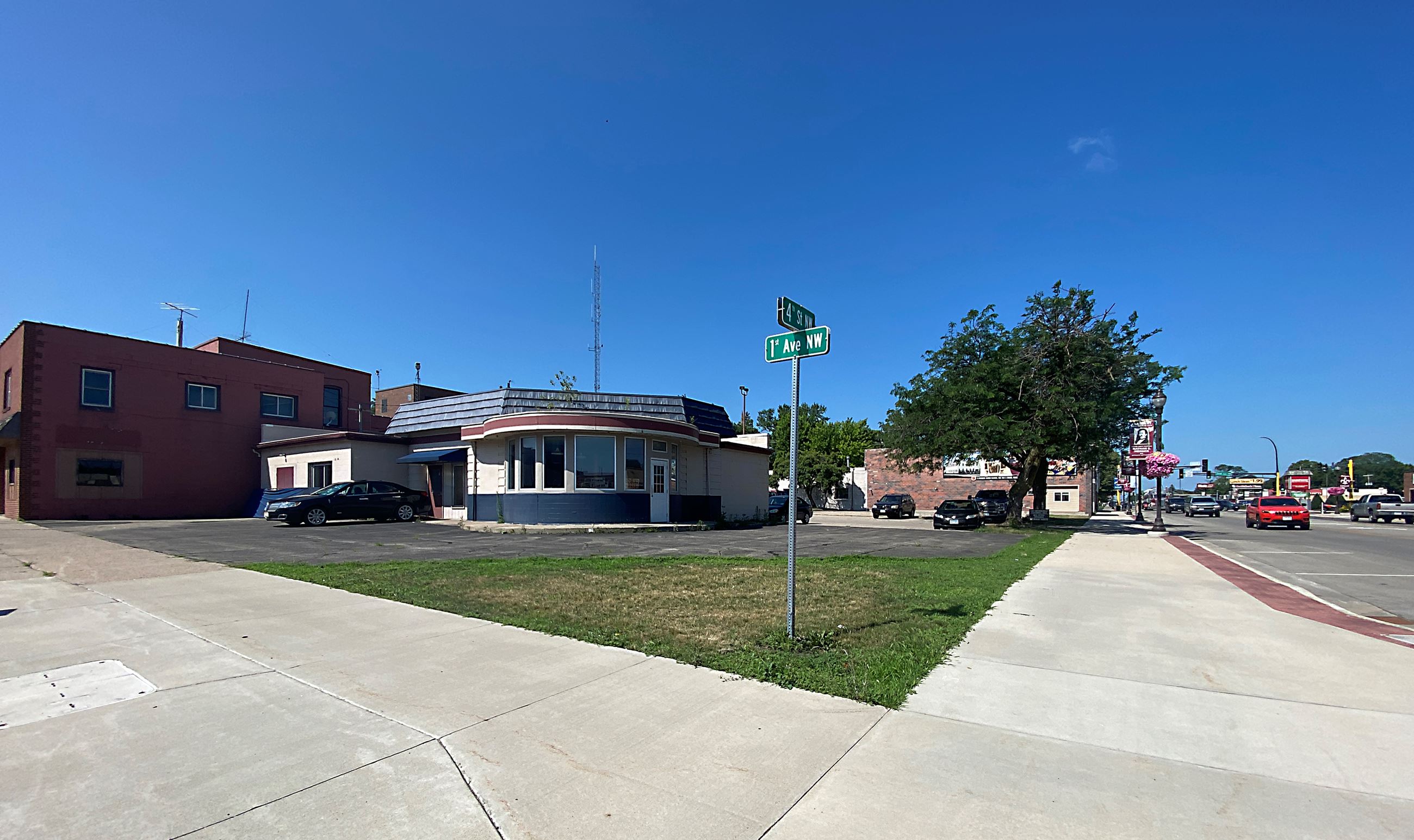 Why did the county look at these properties?

Rice County's Board of Commissioners acquired most of the eight properties intending to use the land for a jail expansion.

Once the board decided not to use the properties for a jail expansion, it needed to consider what it envisioned for the block, a gateway to Faribault’s historic downtown.

The buildings, anywhere from 65 to 120 years old, had a variety of issues, including outdated mechanical systems and structural problems, common with structures of that age.

When did the board decide to demolish the buildings?

The board approved the demolition of the seven properties on Augh. 27, 2022. Demolition began Nov. 7 and took about two weeks to complete.

Is there going to be a park on the First Avenue portion of the block?

A community park is planned for the parcel immediately north of the Friendship House on First Avenue.

Is there a way to recognize Olof Hanson, architect of the Klemer Building?

Hanson, believed to be the nation’s first architect and a Minnesota School for the Deaf alumni, designed several Faribault buildings, some of which still stand. While nothing has been decided, some recognition of Hanson’s contributions may be included in the park planned for First Avenue.